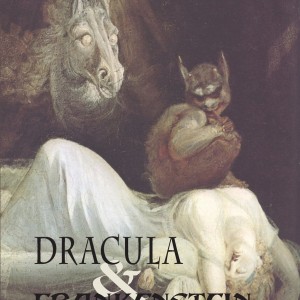 Two volumes in one. In 1897 Bram Stoker wrote a classic horror story that has spawned hundreds of imitators but has never been surpassed. From Anne Rice’s Interview with a Vampire to such writers as Stephenie Meyer, the story of the vampire–and the godfather of them all, Dracula–lives on. Compelling, chilling, engrossing, filled with suspense and fear–this is a tale you can’t put down. This edition includes an interview with Bram Stoker, as well as a rare and exciting prologue that Stoker wrote that was removed by the original publisher in an effort to shorten the book.

Frankenstein, Mary Shelley’s prophetic classic, deals with the dangers inherent in the single-minded pursuit of science. It also portrays the injustice of a society that persecutes those who are “different.” Could Dr. Frankenstein’s creation have become a man rather than a monster? Disturbing, thought-provoking, and moving, Frankenstein is much more than a novel of terror.

Be the first to review “Dracula & Frankenstein, by Bram Stoker and Mary Shelley” Click here to cancel reply.