Home / Products / Moses and the Exodus, by Moses and Josephus 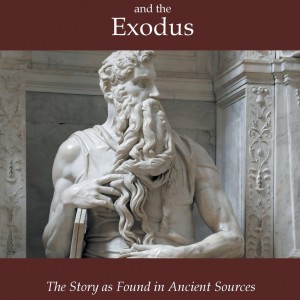 Moses and the Exodus, by Moses and Josephus

What is the true story of Moses and the Exodus from Egypt? The story has been variously told in such blockbuster movies as Cecil B. DeMille’s The Ten Commandments and Ridley Scott’s Exodus: Gods and Kings, not to mention the animated The Prince of Egypt.

Despite various interpretations of novelists and filmmakers, ancient sources are surprisingly complete in telling what really happened. This book brings together two histories that tell his story. The account in the Old Testament (the Jewish Torah), was purportedly written by Moses himself. And Flavius Josephus, the celebrated Jewish historian, wrote Antiquities of the Jews in the first century. The Bible section is from the American Standard Version, written in modern English with readable paragraphing. Included are selected chapters from Exodus, Numbers, Deuteronomy, and Joshua. The book includes a helpful appendix drawn from the Jewish Encyclopedia.

These accounts tell of the babe in the basket in the bulrushes, the oppression of the Pharaoh (who may have been Ramses II), the burning bush, the miracles and the plagues, the parting of the Red Sea, the Law of Moses, and the Tabernacle in the wilderness. We learn about the brass serpent, the golden calf, the manna, and the quail. We read about Moses’ wife, Zipporah, and his successor, Joshua. And we see the miraculous details of the forty years the Israelites spent wandering in the deserts of Sinai, hoping to finally enter the promised land.

This book is must reading for students of the Bible, of ancient history, and of the biblical prophets, as well as anyone who wants to know the true story of this great man, one of the epic leaders of all time.

Be the first to review “Moses and the Exodus, by Moses and Josephus” Click here to cancel reply.