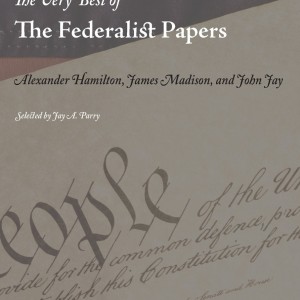 The Very Best of the Federalist Papers, by Alexander Hamilton, James Madison, and John Jay

The Federalist Papers contain some of the greatest political writing of all time. Written to New Yorkers in 1787 and 1788 to urge the ratification of the proposed new Constitution, the papers received immediate respect. They were published in book form in 1788 and had considerable influence in both the New York and Virginia ratifying conventions, serving as a source of philosophies and arguments in both those crucial states. The papers were originally composed as letters sent to and published in New York newspapers.

The authors of the papers, Alexander Hamilton, James Madison, and John Jay, wrote under the single pseudonym of Publius. By obscuring their true identities (a common approach of the time), the authors could make their arguments without any of the political baggage attached to their own names.

Thomas Jefferson later wrote that The Federalist Papers were “the best commentary on the principles of government . . . ever written.” Subsequent historians have agreed. For example, Clinton Rossiter wrote, “No more eloquent, tough-minded and instructive answers have ever been given by an American pen. . . . The message of The Federalist reads: no happiness without liberty, no liberty without self-government, no self-government without constitutionalism, no constitutionalism without morality-and none of these great goods without stability and order.”

The Federalist Papers contains cogent arguments, deep insights, and timeless political philosophies that help readers and thinkers of the twenty-first century more fully understand the marvelous government provided for in the Constitution of the United States of America. This edition contains the very best of the Federalist Papers, carefully selected by Jay A. Parry, author of The Real George Washington.

Be the first to review “The Very Best of the Federalist Papers, by Alexander Hamilton, James Madison, and John Jay” Click here to cancel reply.